skip to main | skip to sidebar

A special message to Craig Smith from Dads On The Air who uses the name Neb-Maat-Re and who likes to bag his ex wife constantly when he's not stalking her and whine constantly about child support. We know you work at Department of Natural Resources in Melbourne and we hope your ex wife Googles your name to find out all the mean things you've been saying about her. Oh and Craig if you Google your IP address it shows what websites you've been visiting. 157.128.218.206

"Yes, if you don't want to be found, just don't put yourself on the internet in any format.

She may have taken her Facebook page down, but she is now on Twitter - which seems appropriate.

Is Pink really interested in invitations from a 43 year old nobody from rural Victoria?"

"MICHAEL GREEN QC:" We'd lose again, a whole generation of separated children, in terms of their really healthy relationships with not only their fathers but their mothers too, and I know that separated groups, fathers' groups in particular, shared parenting groups can conjure up over a million votes and that's something that I think the Government will take into account."


We say: Really?
When will the Shared Parenting Council of Australia and Michael Green ex husband, ex president ex everything, in particular realise that bullying by men and threats by fathers just will not work anymore? You might have been able to threaten the previous flaccid penis government but it isn't going to work anymore! You might have been able to bully your ex wives when you were married and push your kids around but no more.
The women and children of Australia are tired of your bullying. The people of Australia are tired of your bullying and the Government of Australia in particular is tired of your bullying.
The women and children and good men of Australia will gladly make up your numbers in votes for the Government and relegate you losers to the streets like you deserve. You've lost your funding, lost your suck up political allies and you are now the lepers of society. Change or be left behind. You give all good fathers a bad name. 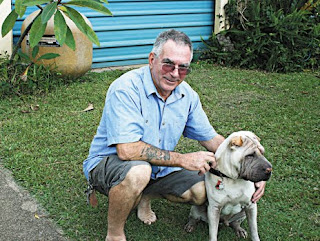 It’s a truism to say there are no winners in a divorce.
Men in particular are often hit hard, dealing with loss, separation and courts which many men say rules in the favour of women.
Some men, faced with these challenges, give up the fight.
George Donnelly, President of the Cairns branch of the Lone Fathers Association has experienced divorce first hand and now offers help and support to other men facing similar circumstances.
“I got involved in the Lone Father’s Associations in the 90s.
I had a wife and a house and kids and I grew up in the old fashioned way.
I came first and then my wife came along and the kids came along and I was responsible and I worked hard and I did that for 25 years.”
When George’s wife met someone else, she also took out a twelve - month domestic violence order against him, which stated, “she feared he may at some time become violent.”
“I was the second person in Australia to get one of these, they’d just introduced them.
I was kicked out of my house of 28 days and told never to go back there again,” he said.
“I started protesting because I felt the law was wrong.
You didn’t have to prove anything, you just had to say, ‘I fear.”
“I got involved because of the injustice of it, I had no say, and I virtually didn’t exist.
I didn’t like that you could be taken out of your house on a word and have no rights, no rights.” “I stood for three days in the rain protesting, in Canberra.
Barry Williams, Ex-President of the Lone Father’s Association came along and said, ‘why don’t you spend your energies helping us?’ and that’s how I got involved.”
Remarried and living in Cairns, George runs the Cairns branch and says there’s about 20 blokes involved at the moment. “People come and go as they get their problems solved.
We don’t have regular meetings, it’s more informal support.” George says there are many who need help and he’s glad he’s been able to make some difference.
“The thing I’ve been able to do is grow my life back again, but also help a lot of people. No matter how angry you are, there’s always light at the end of the tunnel.”
He said The Lone Father’s Association encourages parents to seek support and sustain their children within a happy positive family environment.
Their website can be accessed at lonefathers.com.au Father’s needing support can contact George on 0438 465 883.

Georgie Girl left these comments but we felt they deserved to be on the front page. Thanks Georgie Girl for further exposing the senile old man known as Barry Williams.


georgie.girl76 said...
Barry Williams is a damn idiot. He is protecting violent, moronic men that have convinced themselves that they have done nothing wrong by bashing the hell out of a woman. How tough of them! And to pretend to care about the children involved, when all these recently separated men do is rob their children and ex-wife or partner blind by spending all the money and lying to child support about how much they earn, so they can spend it all on themselves and more than likely, their new piece of ass that they are in bed with!!! What a total moron.


August 14, 2009 7:37 AM
georgie.girl76 said...
boo hoo Barry. Just because you were one of the only men to have a supposedly (which I totally doubt) 'real' case in which you were the victim...grow balls you woman hating spastic.


August 14, 2009 7:39 AM
georgie.girl76 said...
What a hypocrit you are. Your child, Amanda Williams had an affair with my husband for 3 years, and is still in bed with him (hope they burn in hell). I was married to him for 13 years and have 4 children to him. He bashed the hell out of me for 16 years. You have bred a woman that is following in your disgusting hyptocritical footsteps.You deserve the very very worst in life. Rot in hell the lot of you.


August 14, 2009 7:48 AM
georgie.girl76 said...
Oh my GOD Barry, are you a total idiot????Here is a little bit on info that leaves me speachless:"Back in session, Barry Williams, the president and founder of the Lone Fathers Association, prosecutes some of the familiar themes of the men's rights movement in a mild tone sometimes at odds with the strength of his rhetoric. "Both men and women are, in fact, equally likely to be perpetrators of violence in relationships, although women are somewhat more likely to be seriously injured," he declares.Shit man, are you living on a different planet? You must be doing some serious drugs or something. Maybe you got dropped on your head at birth. Grow up and get an adult view on the world little boy. Just because you are old, does certainly not make you wise. You are a PERFECT example.


August 14, 2009 8:04 AM
georgie.girl76 said...
The more I read of your completely useless, unfounded satements, the more I belive you have a very limp grip on reality. You think that the patriarch has transformed into a matriarch?? Oh dear. You should get a little more informed and get into a little more reality. And look in your own backyard.
August 14, 2009 8:10 AM 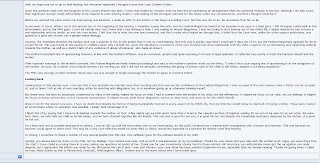 Singlemum an apparently new user on Familylawebguide joined and participated in the forums only to be blasted by the dumbest of the dumb, Mike Taylor, Peter Saxon akak Conan and the stalwart a**hole Michael Green aka Agog/Sisyphus.

MikeT was the first flunky sent in to attack her point of view which was against deadbeat dads and fathers and grandparents whose only involvement in a childs life was abusive. MikeT posted his usual cut and paste from the CSA website and spouted off his usual pompous gibberish. Trouble is Mike we've read your blog and Tricia's comments about your son so we don't understand your high horse attitude. Maybe a move back to England might be in order because we don't like whinging Poms here.
(Google Trish's name if you want to find her blogs.)

Didn't the Familylawwebguide obtain their funding by claiming to be a "Family" resource and the websites own front page says it is for all parents. Why was Singlemum attacked and threatened with a banning because her views don't conform to your misogynistic ones? You just proved the site is only man friendly and proved that you obtained your Government funding by deception and fraud. The current investigation will force you to pay it back to the Commonwealth.
Posted by Phoenix at 7:05 PM 3 comments:

It seems Knoll is a family name:

Lindsay Jackel
View profile
More options Feb 14 1996, 6:00 pm
Newsgroups: soc.genealogy.german
From: jac...@melbpc.org.au (Lindsay Jackel)
Date: 1996/02/14
Subject: Surname: JACKEL / JAEKEL / JAECKEL etc.
Reply to author Forward Print Individual message Show original Report this message Find messages by this author
I am seeking to find out as much as I can about my German ancestors who came to Australia (state of South Australia - Barossa Valley) in the 1840s and then moved over to Melbourne in the state of Victoria, Australia.
Do you know anything of the origin of the name or its meaning?
It originally had an umlaut above the "a".
Do you know why they would have left Germany ('ost prussen'?) at that time?
Carl Erdmann Jackel arrived in South Australia with his wife Johanna (nee BLEICHER) and children Hermann and Auguste.
Thank you, Lindsay Jackel ...@melbpc.org.au>
PS I am also interested in the name KNOLL from Wurtenburg (?). ,-._\ Lindsay Jackel / Oz \ ...@melbpc.org.au> \_,--.x/ Locked Bag 5661 Melbourne Vic Australia 8100
Posted by Phoenix at 10:25 PM 2 comments:


We wonder what you would diagnose your wife as suffering from?

http://wicked-stepmothers.blogspot.com/2009/06/trish-taylor-nsw.html
Posted by Phoenix at 3:01 AM No comments:

Here is a proven link from the Black Shirts to the Shared Parenting Council of Australia.
Lindsay Jackel is Victorian president of the Shared Parenting Council of Australia.
We believe that Lindsay Jackel was involved with the Black Shirts a militant and fanatical group terrorising women in Victoria. Here is proof that he had some involvement with them. Manumit is an alias of Lindsay Jackel's.
And what does "Martyr to the cause" mean exactly???


"Some of you may have already heard a little about this group. Below is a
composite of various articles about the Blackshirt group in Melbourne,
Victoria, Australia, fwd fyi by way of background.

Additionally, several associated articles follow, and are in turn followed
by various commentary.

The group is organised and in your face. They are Dads who have lost
everything, have received no justice or fairness at the hand of a feminist
(family and magistrates) court and legal (government) system (when they
were taught in school that they would if innocent), have nothing to lose
and are frustrated and angry. Their hopelessness has turned to despair and
to depression. The Blackshirts offers them community and hope.

John Abbott, their leader, is known to me. He is both angry and committed.
He will not be deterred and, if necessary, will no doubt be prepared to be
a "martyr" to the cause.

Victoria is a southern state of Australia.
Melbourne is the capital city of Victoria."

http://groups.yahoo.com/group/euro-dads/message/7976
Posted by Phoenix at 1:43 AM No comments: